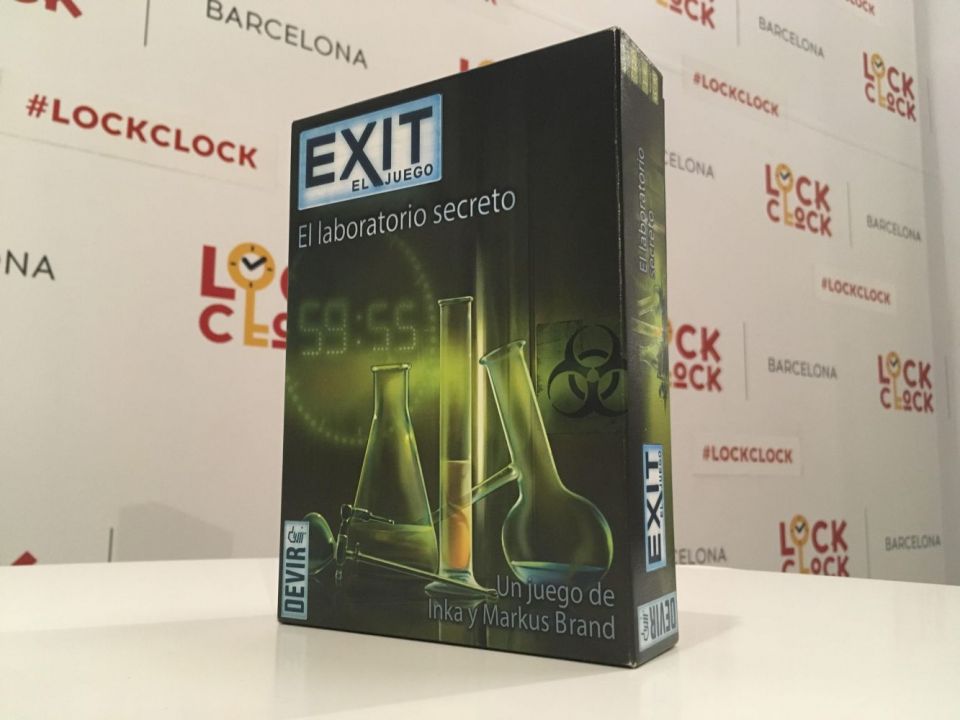 Hey Lock-Clockers! How is that going?

Nowadays, the boom of the escape rooms has crossed the borders of alternative leisure to jump to other formats. Today, we’ll be be talking about the escape rooms as board games. Specifically, about "EXIT: The Secret Lab" by Devir*.

In the role of helpless subjects of science tests, you will be locked in a mysterious laboratory after being drugged. Your only help will be a notebook by Walter Jesse who, apparently, has been in that same situation as you and also a strange disc that will be very useful.

The game system is quite simple. You will have three decks of cards that you can use: one with the different parts of the riddles and puzzles, another with possible resolutions and a last one that contains the necessary hints in case you don’t know how to continue. With the notebook, you will know which cards to reveal and how to begin your mission. These will provide you either the riddles or the fundamental elements to solve them and will guide you throughout the adventure until you escape the secret lab.

The tests you find during this escape will express your capabilities to the fullest. The observation, an open mind and, of course, logics, will take on important roles to be able to overcome this situation. Not to mention certain mechanics that, without going into details so we don’t spoil anything, were especially surprising.

The system that will allow you to find out if your solution is correct or not has an intriguing and mysterious system that generates a gratifying sensation with every success, an essential part in all the escape rooms and an essence that the designers of Exit have captured perfectly.

In our experience starting in the world of portable escape-rooms with Exit, we would like to highlight:

This is why we want to recommend you this experience, whether you want to try something new or you want to play an escape room and don’t find any available nearby.

Do you dare with this adventure? If not, we leave you this little riddle so that you can warm up. By commenting the correct answer in our Facebook post you will enter the draw for a free session from Monday to Thursday for any of our rooms.

This time, the thing goes with letters:

N.d.T: The game in English is not designed by Devir, but by Thames and Kosmos Games.